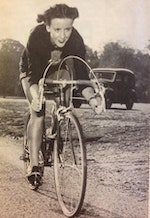 One of the pioneers and champions of women’s racing is Eileen Gray. It’s a name that might not be familiar to many, but the incredible vision and hard work of this woman made a significant contribution to establishing women’s cycle racing on the national and international stage.

Growing up in Dulwich, she wasn’t bitten by the cycling bug until well into World War 2, where she rode her bike to work as an engineer through all weathers, past bomb holes and through rubble.

Post-war, she was one of the three women that made up the first ever Women’s International Team, cycling in Copenhagen, and pushed hard for the UCI to recognise first women’s records and then racing. She became president of the British Cycling Federation (the precursor to todays British Cycling), and in later years was Deputy Commandant of various British Olympic teams, Mayor of Kingston Upon Thames, and most recently was one of the Torch Bearers for the 2012 London Olympic Games.

Her achievements helped grow women’s cycle racing from the ground up, and establish the foundations upon which the champions of today continue to build – with her efforts recognised with an MBE and CBE for services to cycling. We have a lot to thank her for!

It's the first race of the 2014 DH MTB season, and the stars of women's DH racing lined up to compete...