After the huge success of the inaugural Enduro World Series, which took the mountain biking world by storm in 2013, all eyes were on the southern hemisphere for the first round of  2014.

Located in the volcanic mountainous region of Nevados de Chillan in Chile, the route was characterised by soft ash, sulphurous vents, exposed rocky mountain side and lush forest, all tinted with glorious autumnal colours.

Riders had clearly spent the off season training hard, and the level of racing was something else. Anne Caroline Chausson was strong from the beginning, clearly completed recovered from the injury that dogged her performance last year. Tracy Moseley, the current Enduro World Series Champion, maintained a steady performance, winning the 3rd of the 6 stages.

Placing first overall was Anne Caroline Chausson, dominating from the start. Tracy Moseley came in second, and Cecile Ravanel pipped Anneke Beerten to the post on the final stage placing third, with Beerten in fourth. Also worth a mention is Anka Martin, placing in 8th. 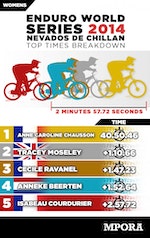 Also worth a read:

Our top bike cafes to visit for a well earned pit stop.

The Brompton Urban Challenge 2014 proved to be a huge success

Our top bike cafes to visit for a well earned pit stop.

The Brompton Urban Challenge 2014 proved to be a huge success

So far so good, but will it stand up to the test?

Woman Has Bottom Slapped While Out Riding

Have you ever been the victim of a slapped bottom while out cycling?

Woman Has Bottom Slapped While Out Riding