Track star Jess Varnish has been racing a bike since she was ‘four or five’, having been encouraged onto two wheels by her dad, then supported through British Cycling’s Go-Ride scheme and the Olympic Development Programme thorough her childhood and teen years.

Twenty years on, Jess observes that at the time, it wasn’t considered all that ‘normal’ to be into cycling,  but that the perception of cycling and sport is rapidly changing.

She explained: “My dad got me into cycling. Back then it wasn’t really a normal thing for kids to get into. I don’t know why but it’s just got really popular now.”

She joined Go-Ride sessions, which were the first step for around 60 per cent of the cyclists who will ride at the Rio Olympics – and said: “Go-Ride is good because it helps young people feel confident on the bike. Some people think it’s dangerous but it’s not if you know what you’re doing.”

Unfortunately, a lot of teenage girls give up sport when they hit secondary school. Jess backed British Cycling’s  plans, two years ago, to get one million more women on bikes – we asked what can be done to cut down the drop out.

She said: “It’s about having role models, and who you can look up to. Victoria Pendleton was always my role model, she was the perfect age for me to look up to, she was quite accessible and I’d always see her at races and things.”

Jess’ hard work meant she had the amazing opportunity to partner with Pendleton for the Team Sprint at the 2012 Olympics, and she said: “When we first started racing together, cos we got on so well, I didn’t really see her as Victoria Pendleton, I just was her as my mate.”

It’s just got to be seen as cool, and that is starting to happen.

Of course, not all teens have the chance to race with their idol – so what else can help keep young girls active? Jess said: “It’s just got to be seen as cool, and that is starting to happen. I think now a lot of people are seeing being muscley and going to the gym and lifting weights as being really attractive, whereas before I think it was seen as being quite butch.

“Loads of people are always putting on their Instagram ‘I lifted this today’ and ‘I lifted that today’. I’ve been doing that since I was 14, 15, but it was never seen as attractive or cool. 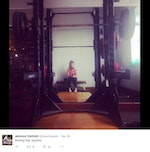 I think it’s got more attractive to be sporty, and fit and healthy, rather than sit on your arse, paint your nails, and eat crappy food – that’s the way the world is going now, it’s good.

What else does she do in her spare time? “I like to do ‘not a lot’” she said, “I’m so tired usually I just walk my dog, I’ve got a little sausage dog, I just hang out with him.”

With goals cantered around performing at Rio in 2016, Jess is hard at it, day in, day out, but she doesn’t see that as a chore – saying: “I never see training as something I need motivation to do – I just do it, it’s what I do, I want to do it, I never feel like I need to motivate myself.”

[Check out these 15 tips if you do struggle with motivation]

Jess’ 2012 Olympics didn’t pan out as she had hoped – she and Pendleton were disqualified on a technicality, meaning the Gold medal they should have won was swiftly snatched away – but Jess is channeling the experience to a positive goal – “I’ve got the experience of going to an Olympic games now and I really think you need that, I don’t think what anyone says to you can replicate that. Preparation is going very well.”

SPD shoes don't have to belong on the bike alone, here are a couple of pairs that are great on and off the bike.

We look at some of the coolest cuff's in the peloton

To celebrate the road racing season being officially in full swing, we've teamed up with Pearl Izumi Tour Series for an exciting competition!

SPD shoes don't have to belong on the bike alone, here are a couple of pairs that are great on and off the bike.

We look at some of the coolest cuff's in the peloton

To celebrate the road racing season being officially in full swing, we've teamed up with Pearl Izumi Tour Series for an exciting competition!

Yes, you don't have to spend a fortune to get your bike feeling brand new again!

Looking for a 100+ mile event that you'll look back on proudly for years to come? Here are some of the best.