You’ve spent all year slogging away to keep off those annoying extra pounds that keep sneaking back on and making you feel fat, then Christmas comes and you chuck it all out of the window in the name of the ‘holiday spirit’. Don’t deny it, we all do it. But this year ask yourself if that extra mince pie or slice of Christmas cake is really worth it? Let’s face it, it probably isn’t.

We get it, no one wants to be the bah humbug at Christmas who refuses the platter of deliciously crispy roast potatoes because grandma insisted on cooking them in goose fat. But you don’t have to be a grinch in order to stay on track.

Like at all times of the year, managing your weight and keeping your figure in shape at Christmas is all about treating yourself, in moderation.

If you don’t want to be in tears trying to do up your work trousers come January and find yourself in line with the masses signing up to the gyms on a ‘new year, new me’ mantra, keep all of your hard work in order this holiday season by remembering just a few easily forgotten things.

The lights may be up in town, your neighbours may even have their Christmas trees up but that doesn’t mean that come December 1st you need to cover the house in boxes of Quality Street and finish every meal with a platter of cheese and biscuits, justifying your actions with the old ‘but it’s Christmas’ excuse.

If you go slightly awol from your diet over Christmas that’s one thing (I mean, how many pounds could you actually put on in two or three days anyway?), but if you start slipping up daily from the first of the month, there’s no chance that hot little dress you’ve bought for New Year’s Eve is still going to fit you on the 31st.

Get it firmly in your head that Christmas starts on December 24th and finishes on December 26th. The chocolates can stay out for those three days and just one box will be enough – if you can’t decide between Roses, Quality Street, Celebrations and Miniature Heroes let the Easy Decision Maker decide for you.

Alcohol has calories too

‘Tis the season for after work drinks, Christmas jollies and family get togethers and with all of those things tends to come a glass or two of bubbly, a couple of bottles of beer and a mug or two of mulled wine. But not this year.

Don’t worry, even we’re not going to deny you a Christmas tipple or two but we’re certainly not going to encourage weekly binges or too many eggnogs either.

If you’re undecided about whether you actually want to go to Christmas drinks with your neighbour’s brother’s girlfriend’s boss then just don’t go and you’ve instantly saved yourself an additional unwanted calorie intake. But if it’s your own brother’s Christmas drinks session that is on the calendar then go, but consider cycling there instead of taking a taxi so that you won’t be tempted to drink too much.

Once you’re there choose your drinks wisely. A large glass of wine comes in at around 160 calories, a pint of beer 180 calories, a glass of eggnog 223 calories and a single G&T at 120 calories. If you’re usually a Guinness drinker (210 calories in a pint), try changing tack and ordering a Grolsch lager instead for just 145 calories. Likewise, if you’re privy to a Baileys (130 calories), go for a glass of port at just 79 calories instead.

By limiting the number of Christmas drinks nights you go to, changing your beverage of choice and saying you’re only staying for one (and sticking to it) you’ll be doing yourself proud.

The best part of any roast dinner (Christmas lunch included) is the crispy roast potatoes and we would never, ever, try and tell you that you can’t indulge with a couple of these crispy spuds on December 25th. But, what you don’t need to do is lather them in goose fat just because it’s Christmas and you want to ensure that they are crispy enough to impress the mother in law. We’ve got two words for you – olive oil.

To make the perfect roast potatoes without ruining your waistline, pick your potato brand well – Maris Piper, King Edward and Rooster potatoes are all trusty choices. Next bring a pan of water to the boil whilst you peel and chop your potatoes to that perfect two inch(ish) roastie size.

Once the water has come to the boil (and only once it has come to the boil) pop your potatoes in and keep them bubbling for around 15 minutes, until they’d almost be ready for mashing. At the same time place a baking tray with a generous coating of olive oil covering it’s base, in a preheated oven at 220 degrees celsius.

Use a colander to drain the potatoes from the water and then give the colander a good shake so that the potatoes get nice and fluffed up around the edges. They are then ready to be poured onto the heated baking tray. Roll each potato in turn around in the oil, so that no side is left unlubricated. Shove them in the oven and leave them for twenty minutes, give them a turn, and then leave them for another twenty to thirty minutes to crisp up. Follow this to the key and you’ll be guaranteed super crispy spuds without the added goose fat calories.

And don’t be thinking you need six roast potatoes either. We know it’s Christmas, but even Santa doesn’t need that many. Three will do.

It may be snowing but you can still cycle 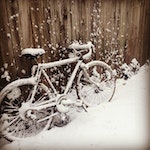 We know you wouldn’t use the excuse of a little bit of snow as to why you haven’t cycled to work in weeks (of course you wouldn’t), but if the weather really gets so bad this December that you really can’t bring yourself to layer up in reflective winter clothing to start your morning commute, that doesn’t mean you’ve got a get out of exercise free card either.

Firstly, commuting isn’t the only time you can get out on your bicycle. Sure, if you step outside at 6am on a winter’s morning no one would blame you for wondering if you’ve accidentally got up at 2am… in Iceland. But, by mid-morning the sky should be somewhat resembling the blue that we remember from a few months ago making your lunch break the perfect time to go for a peddle.

The weekends are also a great time to get outdoors and get pedalling. Those winter days when the sun is bright in the sky, for us, are the most idyllic days for a leisurely cycle through a forest or around a country park.

And secondly, cycling isn’t the only form of exercise (crazy, we know). Normally we wouldn’t encourage you to leave the bike at home to go off to the gym or try your hand at snow-boarding but if it’s the only way to ensure you don’t slip back to that dress size that you’ve worked so hard to make a distant memory, we’ll turn a blind eye just this once.

The winter months bring about a whole new range of sporty activities that you can get involved with. If you live near an indoor ski centre (or are lucky enough to have a boss with a holiday home in Switzerland) then you’re good to go.

But if the idea of hurling yourself down a mountain with a long plank attached to each of your feet frightens you to death, you could try figure skating, tobogganing or squash instead. Failing that, there’s always swimming with the promise of a luxurious sauna afterwards sure to lure you there after work.

Reward yourself in other ways

Christmas is the time to treat yourself, and after all the hard work you’ve put in to losing weight this year you really do deserve to reward yourself – just don’t do it with chocolate cake, mince pies and double cream.

Instead, why not buy yourself a little something when you’re out doing your Christmas shopping. Get yourself a pair of super short cycling shorts that you would never have dreamed of wearing a few months ago, or treat yourself to one of our favourite stocking fillers for the cycling-mad lady.

We know it won’t be easy to not overindulge this festive season and avoid Christmas weight gain, but we can also promise you that it isn’t impossible either. Good luck, and have a merry (but not too merry) Christmas!

Liked this? Check these out too:

Lose weight cycling: Everything you need to know

Cycling Vs the Gym

Stick to these new year's resolutions for a happier, healthier and more cycling-obsessed 2015

Forget about turkey soup and ham sandwiches, here's how you should be using up those Christmas leftovers

Stick to these new year's resolutions for a happier, healthier and more cycling-obsessed 2015

Forget about turkey soup and ham sandwiches, here's how you should be using up those Christmas leftovers

How to Shed Christmas Weight

We're all due to overindulge this Christmas – here's our advice on getting back to feeling like yourself come 2015.

How to Shed Christmas Weight

Oh what fun it is to ride!