Shanaze Reade is a British BMX racer and track cyclist. Probably best known for her BMX exploits, she has won the UCI BMX World Championships three times, in 2007, 2008 and 2010. She also has golds in the Team Sprint event from the UCI Track Cycling World Championships in 2008 and 2009, where she was lead rider for Victoria Pendleton after taking to track cycling to keep herself fit for BMX

Born to a Jamaican father and an Irish mother in September 1988, Reade’s BMX career began when she was just 10-years-old at the nearby Tipkinder Park in her native Crewe. Bob Field, the track operator, and BMX professional Jamie Staff were both big influences on young Shanaze and helped to guide and motivate her. She’d been a keen track and field athlete up to that point, but never looked back once discovering BMX.

To give you an idea of her approach to competition, throughout the 2005 season she competed against the men in the national championships. That year she also raced in the UCI World Championships despite having fractured her knee a few weeks previously. Bandaged up and full of painkillers, she crashed out in the quarter finals. In 2006, she turned professional and immediately won her first pro race. By the end of 2006, she was Britain’s number one ranked rider in the Men’s 19 and over Elite category, despite being 17 and weighing 76kgs. Going into the 2008 Olympics in Beijing, she was hot favourite for the inaugural BMX race, but crashed in the final trying to overtake Anne-Caroline Chausson, the eventual gold medallist. In 2014, Shanaze Reade will race on BMX's professional tour in the United States after deciding to move away from British Cycling's Olympic podium programme
9 years ago | by Kirsty Ho Fat 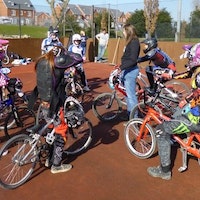 Lauren Smith opens our eyes to the wonderfully social sport of BMX.