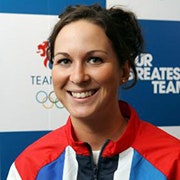 Lucy Martin is a British road and track cyclist, best known for competing at the Olympic Games in London 2012. She did not achieve a podium position herself, but acted as lead rider for team mate Lizzie Armitstead, who took the silver medal behind the Netherlands’ Marianne Vos.

Lucy was born in Whiston, Merseyside in May 1990, she was spotted at the age of 15 by British Cycling’s Talent Team after a friend persuaded her to go along and take the tests during class time. Soon afterwards she joined the Olympic Talent Team. In 2008 Lucy took part in the British National Track Championships, where she came third in the Scratch Race, and at the UCI World Cup event in Manchester, where she claimed silver in the Points Race. In 2010 she took part in the Trophée d’Or Féminin, finishing a highly creditable third on the fifth stage. However, in May that year she was one of a number of British riders who were hit by a car whilst out training in Belgium. She suffered a cracked vertebra, but fortunately did not have to miss too much of the season.

Lucy signed for her first professional team, Garmin – Cervélo, in 2011 where she was part of a team that featured four British riders. Unfortunately budget problems meant the team had to disband in December 2011, but the four riders – Lucy Martin, Emma Pooley, Lizzie Armitstead and Sharon Laws, were soon picked up by the Dutch team AA Drink – Leontien.nl for 2012. After AA Drink pulled their sponsorship at the end of that season, Lucy and Lizzie Armitstead moved on to the Boels – Dolman team. Lucy is currently based in Girona, Spain. 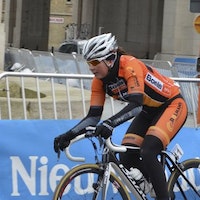 A stark insight into women's pro-racing with Lucy Martin.