We’ve been here before, and it probably won’t be the last time we visit this matter either. Last night we were failed again by a leading cycling brand who simply don’t know how to represent women.

Women in the cycling industry are already at a disadvantage with lesser media coverage, lesser pay and prize money, and limited availability of kit and clothing. Thankfully the women’s scene has been growing at a rapid rate in recent years, and the gender playing field is starting to level out.

However, it appears we’re still in this knuckle-dragging era where sex sells, regardless of what you’re selling. Last night, American off-road protection brand, Six Six One, posted to their Instagram account an implied naked woman wearing nothing but knee pads. Thus ensued a cyber war of the sexes…

I don’t know what this photo is trying to represent, or show for that matter. Where are the shin gouges, the awkward cyclist tan lines, the sweat, the mud and the tears. Where is the essence of MTB in all of this?

There’s no denying that this model is attractive, and those knee pads are pretty good looking. But this cheap marketing tactic of using women is a serious issue in an industry where women are constantly working hard to prove that skill is more important than gender.

I’ve got nothing against nudity and female models, or male models, and I have a pretty light sense of humour, but even I get riled up over ads like this. I often face sexual discrimination when I ride, or even talk bike with the boys, and it’s images like this which contribute to their way of thinking.

Six Six One produce great products, and I know a lot of happy customers who put a lot of faith in their protection, but this sort of sales campaign isn’t something I want to be a part of, or invest my money in.

Their website states: “661 is a brand that embodies what it means to have fun on two wheels”… Well, I don’t see two wheels in this photo, any mud, or even fun for that matter. The knee pads serve no purpose whatsoever. Show me a muddy female, or male, shredding a trail in Six Six One protection. Show me worn out pads that have seen many miles of fun and fails. Show me equality.

Here’s a screen-shot from the Six Six One website, with a distinct lack of women’s… well, anything.

The brand have since posted an ‘apology’ across their social media platforms. However, in this case we don’t feel this cuts it at all. An apology could be posted after a mistake – a misuse of a picture, perhaps a comment made by a member of the team who was clearly not acting ‘on brand’. In this case, SixSixOne must have selected a model, hired a photographer, and set the scene, all with one goal – to create pictures that were objectifying and would satisfy the male gaze at it’s very worst. This was no accident, and we fail to believe the company have succeeded in an ideological 360 in the last 24 hours. 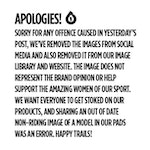 Tut tut Six Six One, you should be empowering women, not objectifying them.

So let’s add this to the growing list of sexist ads in the cycling industry which we absolutely will not take lying down – like sock gate and Colnago’s recent fail. It’s not ok, and you’ll lose our custom if you don’t sort it out.

You may also enjoy:

Women's Representation in the Cycling Media: An Alternative View

Last week we published Laura Laker’s excellent round up of the arguments from the recent panel debate which discussed the question: ‘How is Women’s Cycling Portrayed...

Women's Representation in the Cycling Media: An Alternative View

Panel Answers: How is Women's Cycling Portrayed in the Cycling Media?

Panel Answers: How is Women's Cycling Portrayed in the Cycling Media?

How Is Women's Cycling Portrayed in the Media? - London WaG Evening

Panel will discuss the way women come across in the media

How Is Women's Cycling Portrayed in the Media? - London WaG Evening