The company, born of an idea dreamed up by Product Design student Emily Brooke in her final year of study, has proved an incredible success story. Brooke and the quickly growing Blaze team have opted to offer the new development to the Kickstarter community that helped them find success first.

We caught up with the London based Blaze CEO to find out more about the new light, the Blaze history, and to pick her brains on commuter safety as well as creating a successful product… 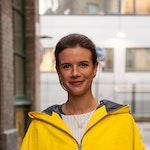 “Before [Kickstarter] it was a silly idea from university and I was a little girl. Kickstarter proved it was viable.”

The Blaze Laserlight Kickstarter page was launched in 2012 and served several purposes aside from funding.  Brooke says: “We were very naïve – we just ran with it. We used Kickstarter to gain a proof on concept – it wasn’t about the money, because unless you smash it out the park you can’t rely on Kickstarter to fund your company. We used it to prove that people would pay for it and thought it was a good idea. Before that it was a silly idea from university and I was a little girl. Kickstarter proved it was viable. And we had useful feedback from people on the platform.”

The new light will be available first on Kickstarter, too – Brooke says: “We want to offer it a lower price for our community, who have got us here today. And there are things we want to get feedback on, like the flash sequences – things that can be software changes which we can alter quite easily.”

The Blaze Burner – will cost £30 for Kickstarter backers and it’s all about “high performance and simplicity.”

Brooke tells me: “We asked ourselves ‘if we were to do a backlight, what would it look like?’ – it’s got the same obsessive attention to detail as the front. It’s an aluminium pebble, with diamond cut edges, it’s fully waterproof, USB charged. It doesn’t have the laser, as the threat the laser addresses is in front of the rider, but it’s got the same battery and lasts over a month. It also has things like a light sensor in it, so it automatically comes on when you move. It even comes on if you ride under a tunnel, which is really cool!”

The light puts out a pretty impressive 100 lumens – but it’s the distribution which is most important to Brooke – she says: “Because it is used to be seen, and not to see. I don’t really understand the lumen war on a back light, as long as its over a certain threshold so can be seen from far away. The 100 lumens are spread out over 27 LEDs, so instead of being one retina burning LED which is straight in your eyesight, it’s spread out so its got really good side visibility.”

“It’s a lovely simple product that hasn’t been simple to get here!”

The devil is in the detail, and she goes on to explain: “We’re really excited about the bracket – it’s taken the most work – almost 3 years! You can set the light at any angle, and the attachment is a really strong magnet, it’s really robust but very easy to take off. It’s a lovely simple product that hasn’t been simple to get here!”

“It was miserable and I was being overtaken by every small child on the road. It turns out there wasn’t a breath of air in the tyres.”

Brooke, who finished her degree at Brighton University, hasn’t always been a cyclist. In fact – her first attempt wasn’t that successful. She tells me: “When I first rode my bike as an adult I borrowed my mum’s ‘sit-up-and-beg’ bike – it was miserable and I was being overtaken by every small child on the road. It turns out there wasn’t a breath of air in the tyres. Not just flat, completely flat.”

That relationship with cycling ended as quickly as it began – but was reignited again – Brooke says: “Then much later I decided to do a long ride for charity. A girl friend was riding from Lands End to John O’Groat, and I joined her. We bought bikes in May, and did the ride in September.

“Training was literally learning to stay on the bike and not wobble off. My first week in clip in shoes was my first week of riding a bike; I fell off so many times. It was a steep learning curb but I fell in love with it.”

“The countryside I loved, but the cities were terrifying still, dangerous and full of problems.”

The end of the ride signalled a change – it was time to get serious as Brooke was embarking upon her final year project – she said: “I gave myself the theme urban cycling. The countryside I loved, but the cities were terrifying still, dangerous and full of problems. So I thought ‘right, I’ll find the biggest problem and tackle it’.”

It took six months of research, but eventually she came to a conclusion – explaining: “The one stat that still baffles me is that 79 per cent of bikes are hit going straight ahead – when someone else swings in to them – that’s the blind spot or people pulling out of side junctions. That was the one to tackle.”

Blaze Laserlight does just that, and it does it so well that even Transport for London became involved when they asked to fit the lights to Santander hire bikes – Brooke explains: “Working with Santander bikes has been a rollercoaster- it’s been a lot of hard work as a tiny start up working with massive organisations – but we’ve done it.

“What’s exciting is that the Laserlight is such an innovative product – we know it is an effective product but its very hard to prove and TFL have paid for 12 weeks of research with the Transport Research Laboratory. I was nervous as we weren’t allowed to be involved at all, as it had to be an independent body – but they submitted a 92 page document which is golden and says things like ‘a bike with a Lazerlight decreases the blind spot to an HGV by over 25 per cent’ – that’s just been golden.”

The research means that the company are in talks with other major cities in America and Brooke hopes this interest will help Blaze to become a global urban cycling brand. She says: “There’s lots of ways of becoming a global urban cycling brand – producing great products, continuing to do research and adding to the conversation, and B2B schemes such as cycle hire bikes in other cities.”

In terms of research, Blaze have been heavily involved, working with Senior Lecturer in Transport Rebecca Aldred on the ‘Near Miss Project’ which looked at the kind of day to day pressures and threats cyclists face.

Brooke chose to be involved because she wanted to provide some useful comment on the on-going debate around cycling safety – she says: “It started because we were getting calls from newspapers asking for us to give quotes on cycle safety, and I didn’t feel comfortable as a consumer product being quoted next to a tragedy. We wanted to actually add some value if we were going to be cited in this conversation. I genuinely believe it will be really valuable research.”

Living and working in London she’s experienced plenty of the pressures that cyclists quoted in the project listed – and her own advice is simple: “Be visible, as visible as you possibly can. And use lights – they don’t have to be ours but you’d be safe if you did.

“Take your time, make sure you’re leaving the house on time so you don’t have to rush and can cycle carefully and slowly. And be dominant, take your place on the road and own it – don’t be scared and tucked into the curb and defensive.”

“You learn more by doing than thinking about doing. Nobody has got the answers, I hadn’t a flip what I was doing, still don’t – but you will learn by doing.

In her 29-years, Emily Brooke has achieved a great deal, and we’re keen to get her advice too for young women looking to bring something new to market, start a company, or indeed do anything to make a big splash.

Her answer is simple: “Go with it- you learn more by doing than thinking about doing. Nobody has got the answers, I hadn’t a flip what I was doing, still don’t – but you will learn by doing. And find people who have more experience than you – if it’s marketing, building websites or manufacturing, find someone who has knowledge and ask questions.”

Interested in the Blaze Burner? Check it out on Kickstarter here.

We talk to this incredible 22-year-old about dealing with one of the tougher aspects of the sport...

Interview: I Went From Beginner to Racer in Six Months, Now I'm a Sponsored Rider

Kelly Murphy joins Boot Our Breast Cancer this year as a scholarship rider - here's her story...

Interview: I Went From Beginner to Racer in Six Months, Now I'm a Sponsored Rider

Feel inspired! Here's 10 women who are doing great things for the cycling industry