The Rapha Festive 500 is an annual challenge to all of us to blow away the Christmas cobwebs and get out on our bikes, at a time of year when many of us would otherwise end up surgically attached to the sofa. Thousands of cyclists all over the world will be attempting to ride 500km over the eight days between Christmas Eve and New Year. Emily Chappell wraps up this year’s challenge.

Unsurprisingly, I was quite tired the day after our Bwlch y Groes escapade, and my encounters with the ice had left me with a stiff neck and bruised buttocks. My brother had resumed his position on the sofa, and I found myself wishing I could join him – but reminded myself that I only had 181.02km to go, and that 107.3km of that would be used up on New Year’s Eve, riding up to a cottage my friends had rented in Snowdonia.

So, I calculated, if I wanted to keep my overall distance as close as possible to 500km, I only had to cover 73.72km over the next two days – an easily-manageable average of 36.86km per day.

That wasn’t so bad, I thought, as I reluctantly did up my cycling shoes, pulled out my fixed gear bike (for a bit of a change) and rolled off towards the flattest local loop I know of – a short ride along the upper Severn Valley – thinking I’d do perhaps two or three circuits to make up my distance for the day.

But the lanes were in a terrible state, swimming with manure in some places, and coated with ice in others. After almost skidding into a hedge for the second time, and thinking grumpily that I hadn’t even wanted to come out for a ride today, I decided that there was nothing to be gained from doing another loop (except possibly a ride in an ambulance), and headed home with a paltry 22.5km in the bank, hoping that my brother would have saved me some mince pies. 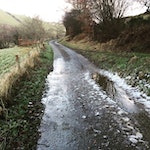 Now it was a numbers game. Discounting my ride up to Snowdonia, I had precisely 51.22km to go before I hit my target. But I didn’t want to become the sort of person who spent longer planning her routes than actually riding them. (Plus, avoiding the laptop as much as possible was another of my festive resolutions.)

So I decided to wing it, setting off on one of my hillier loops that I know to be a round 56km, and cutting out a section that I hoped would equate to roughly 5km. The weather had warmed up, which was nice, but the endless sparkling skies of the previous days had been replaced by a thick grey blanket of cloud, echoing the grey dampness of the road ahead of me.

Sometimes riding in winter really is an endurance challenge, I thought to myself, looking all around me at the distinctly uninspiring landscape, and almost unconsciously speeding up in order to get it over with more quickly.

I ended up following my usual strategy for getting through dull, grey, drizzly rides in Wales – reminding myself of how much I longed for this weather at various points during the Transcontinental, especially the final day of last year’s race, where I spent the afternoon racing up and down Greek hills in 40-degree heat, fervently wishing myself anywhere other than where I was.

I had been through worse, I told myself. I could probably survive the boredom of a dreary Welsh winter afternoon.

And when I got home, I was positively delighted to find that my ride had been precisely 51.3km long – which meant that, provided nothing went wrong tomorrow, I was on target to hit my 500km goal with less than a kilometre to spare.

I was still tired when I set out on today’s ride, but determined to make the most of it. And I had set myself no easy task. It’s not impossible to avoid hills when cycling in Wales, but it does considerably lengthen your journey if you insist on following the valleys. And I’m rarely one to do things the easy way.

So over the hills it was – up and down the rollercoaster gradients of the treacherous Staylittle mountain road and down the eye-watering descent to Machynlleth, while the giants of Snowdonia loomed ahead of me.

Then up again, along the slow drag that took me up to the pass above Dolgellau, the landscape slowly becoming taller and more rugged around me as I crawled northwards.

‘Why do I never come up here?’ I wondered. The spectacular crags lining the road are only a few hours’ ride from my house, and yet I always seem to end up cycling south – down to Abergavenny and Bristol, and the relatively unimpressive mounds of the Brecon Beacons.

I made myself a New Year’s Resolution: ride north. And, as I left the main road and followed a narrow lane up into the mists above Ffestiniog, I realized that this was my last ride of the year – in fact, the final hour I would spend on the bike in what has definitely been the biggest cycling year of my life. And, difficult and tiring though this Festive 500 had sometimes been, I realized that I was laying the groundwork (the long, slow winter miles) for what I hope will be an even better year in 2017.

The sun broke through the clouds briefly as I began the descent into Penmachno, and 15 minutes later I rolled up at the cottage with 107.1km on the clock.

My friends were out at Coed y Brenin, so I pedalled onwards to the pub, which was where they found me an hour or so later, most of the way down a celebratory pint, at the end of my Festive 500.28, and of a wonderful year of cycling.

And how was your Festive 500? We’d love to hear about it!

Expert advice for clubs that want to encourage female membership

Deals of the week in the cycling world

Showcase your bicycle like the work of art it is...