Wiggle Mountain Mayhem nicknamed the ‘London Marathon of mountain biking’ is run annually at Gatcombe Park, Gloucester. It is the world’s largest 24hr mountain bike endurance event that started in 1998; it was originally created for Red Bull, and was first hosted in Trentham Gardens. In 1999 the event moved to Sandwell Valley Park Farm and an Elite women category was introduced. It wasn’t until 2000 that solo entry was allowed for the first time. The race is open to all, and entrants may ride individually or in a team of four, five or ten. Entrants and spectators can camp on site, including a facility to turn up and stay in a pre-erected tented village.

The event continued to grow, and in 2004 it moved to Eastnor Castle Deer Park, Herefordshire. The event has had a number of sponsors; Giant in 2008, Original Source from 2009 to 2011 and finally Wiggle since 2012. The popularity of Wiggle Mountain mayhem meant 2000 riders took part in 2010.

Racers can help fundraise for Macmillan Cancer support by signing up to support them upon registration. The current track in Gloucester is 7.5 miles, offering a more technical route than the previous track at Gatcombe Park. Entrants must try and complete as many laps of the course as they can in 24 hours. Starting with a short run to the bikes, competitors are usually in one of four main categories; Solo, Team, Elite and Mixed. There are also various subcategories such as University and single-speed. 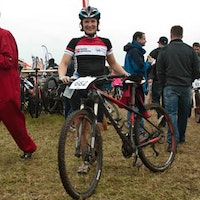 Women and their bicycles: a portrait series, Mountain Mayhem special

Our series of photographs capturing the essence of women's cycling continues, with portraits taken at Wiggle's Mountain Mayhem MTB event.
9 years ago | by Heather Irvine 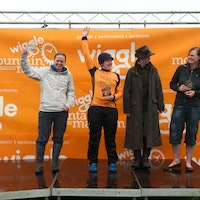 Get inspired to join the 24 hour MTB endurance family. You don't need to be a pro! Honest!