The Raleigh Bicycle Company began life in Nottingham, England in 1887, making it one of the oldest bike manufacturers in the world. Frank Bowden (the company’s founder) so the story goes, was advised by his doctor to take up cycling for the benefit of his health. He bought a bike made by Woodhead, Angois and Ellis and was sufficiently impressed by the machine that he sought out their Raleigh Street workshop and made them an offer to buy the company.

Within six years, Raleigh Cycles was the biggest bicycle manufacturer in the world and has long been associated with mass-producing extremely popular bikes and with helping to make cycling as popular and accessible as it is today.

They are responsible for some of the most ubiquitous bikes of the 20th Century. The Raleigh ‘Sports Roadster’ was a post-war phenomenon, with its comparatively light weight and Sturmey-Archer transmissions, and was imported into the United States in huge numbers. The small-wheeled ‘Twenty’ (or ‘Shopper’ if you put a basket on the front) and the ‘Chopper’ are both iconic models and helped to re-launch the company’s fortunes in the 1970s.

Today Raleigh still produce a wide range of accessible bikes, although production has long-since moved from their Nottingham base, with most parts produced in low-cost locations and final assembly happening in Germany. They sponsor and equip Team Raleigh, a professional racing team who compete in various tours and GP events around Europe. They also sponsor endurance athletes and expeditions via their Raleigh Athletes programme. 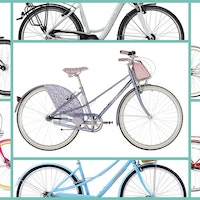 Best Dutch Bikes for Under £500

Smooth, gorgeous looking rides - we round up the very best Dutch style bikes for under £500