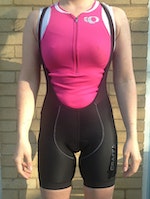 A snug fit that’s let down by a pad that could be better.

We gave our first impressions of Swedish brand Craft’s bib shorts a few months ago – we’ve now had time to spend some time in the saddle in them, and were disappointed they didn’t live up to initial expectations.

The Craft Performance Bibs give a snug fit with their four-way stretch fabric, which provides plenty of support and a nice amount of compression. However, I’m only 5”4 and found the size small to be quite stretched in the body. When I was on the bike, this feeling eased a little, and the mesh straps were fairly comfortable, easily staying in place.

I initially found the pad really uncomfortable – it felt that there was too much material, awkward seams and edges, and an inconsistent density. Thankfully, using a chamois cream eased this. The fit and feel was improved and I was able to forget I was wearing them. The chamois pad is from Craft’s performance range – the middle of three options. On paper, it should have been fine with high-density foam and an anti-shock system but it just didn’t work for me.

The silicon-printed grips on the leg cuffs are very effective – in fact, they didn’t budge at all, but they do inevitably give sausage legs (are there ANY bibs that don’t?!).

Sadly, another mark down for the Craft Bibs is that the material has already snagged at the top of the thigh – we’d expect better after only two wears. However, these are not the most expensive bibs on the market, so if budget is important and the pad works for you, then go for them.

The Craft Performance Bibs have a good snug fit offering effective compression, but are let down by their chamois pad.

Good compression with a snug fit

Shorts stay firmly in place thanks to grippy silicon details

Chamois pad was uncomfortable unless using a chamois cream

We tested out the Hincapie Chantily kit and Giro New Road Range, find out how we got out with it!

And if you’re looking for a new jersey, check out TWC’s 8 of the Best Value Road Jerseys.

Find out how Laura got on with this tasteful Le Col offering.

Find out how Laura got on with this tasteful Le Col offering.

So far so good, but will it stand up to the test?