Peaty’s Steel City DH kicked off this weekend at Greno Woods and the biggest field of women racers took part out of all the four years it has been held. Sarah Staples headed along it give it a go! Here’s how she got on…

There were 48 women racing in two categories: Women, for ladies who had raced quite a few times before and Open Women, for those who had done very little or no racing before the event.

I hadn’t been to Greno Woods before but I have done quite a few downhill races over the last couple of years, so I entered the Women’s category.

For this downhill race I had decided to bring my trail bike – a Commencal Meta 5.5 – following the advice of other bikers who had taken part in the race on previous years.

After signing on and receiving a special Peaty pint glass it was time to take a look at the track.

I could see what people meant by their advice to use a trail bike, as a lot of it was pretty flat, which made it an ideal track for beginners but still a lot of fun for more experienced racers. The track started with a ramp built from scaffolding which gave a good speed boost into the woods.

Heading off the start line there were a few tame rollable jumps and nice sweeping berms, and most of the track was smooth with medium-sized rocks here and there. The particularly big rocks were sprayed yellow to make them more obvious.

About half way down there was the infamous ‘Jolley Gap Jump’. I had heard about it before from people who had raced and I was slightly nervous about doing it, but there was an alternative line around it that didn’t require your wheels to leave the ground. 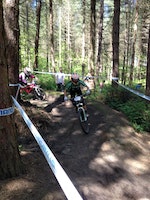 After that there was another series of berms and small jumps before heading towards the finish, where there was another big feature – the bombhole. Affectionately named ‘Death Valley’, the track rolled up to this sudden steep slope which riders needed to drop into to reach the finish just a few metres further on. To the right the drop was steeper and had a few roots that looked as if they could catch a few riders out. And on the left there was a less steep option which was rollable.

I joined the queue when the track opened at 9am, and it was great to see so many girls kitted out and ready to race. I headed down the track on a careful first race run and it felt a bit strange on my trail bike, I am so used to racing on my downhill bike so I had a feeling it would take some getting used to!

Already a lot of spectators had gathered by the gap jump, and even though I didn’t try it on my first race run they were still really supportive, making lots of noise and cheering me on, which was a great boost.

After reaching the bottom I headed straight back up for another go, eager to get more practice in the few hours before racing started. The queue was much bigger this time – around 300 riders were taking part – but fortunately it moved very quickly and I was soon on the track again.

My second practice felt a little smoother and I decided not to put pressure on myself to try and do the gap jump (even though I really wanted to do it). I also decided to take the left-hand line into the bombhole after watching and seeing three riders fall off it in the space of 10 minutes, putting me off completely.

I managed to squeeze in a third run down before racing began. There was time to watch the Rippers (the Under 10 category) before heading to the start and it was great to see so many young riders, in particular girl Ripper Amber Hull, who came 6th out of nine! Definitely a girl to watch for the future.

It was nice to see so many girls being supportive at the start line. Everyone was gathered around and the atmosphere was really relaxed. Before a race I tend to get really nervous but with the atmosphere and so many happy people around enjoying the day I just didn’t feel so worried.

My race run was okay but the thing I enjoyed most was the crowds of spectators lining the track who were so supportive! There were yells of encouragement all the way that really lifted my spirits even more.

I had a rest in the finish area after my first run and was able to watch more of the racing. The view was great and there were huge crowds looking on the finish line and checking out the stalls, food stands and the local Bradfield Brewery stand. The atmosphere around the finish line was fantastic, it was like a bike festival.

Quite a few of the male riders had fallen on the bombhole drop, just metres from the finish line, so it reinforced my decision to take the easier line.

Unfortunately while waiting for second race runs there was a red flag for quite some time and it turned out one of the women riders, Katherine Crompton, had taken a big tumble at the bombhole and had been knocked unconscious. An ambulance took her to hospital but I have since seen on the Steel City Facebook page that she is now back home. Get well soon!

I had a solid second run which didn’t quite match up to my first, but it didn’t matter to me as the experience of the day was so great. It was so much fun to be part of the event and to be able to meet such good people!

If any women are thinking of trying their hand at downhill racing, or any type of mountain bike racing, this is definitely one to take part in!

The full results of the race can be found here.

From the weird to the wonderful, check out our alternative highlights from the Fort William World Cup.

It may look long, it may look daunting but throw caution to the wind and sign up for a long distance charity cycle

The European Marathon MTB Championships will be held in Ireland next weekend, and novices are welcome to come and join the action.

From the weird to the wonderful, check out our alternative highlights from the Fort William World Cup.

It may look long, it may look daunting but throw caution to the wind and sign up for a long distance charity cycle

The European Marathon MTB Championships will be held in Ireland next weekend, and novices are welcome to come and join the action.

It's true! People are being paid to cycle to work in France.

Not sure which amazing woman to cheer for at the Fort William MTB World Cup? This'll help you choose!