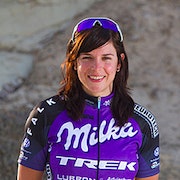 Anneke Beerten is a former BMX rider, turned downhill mountain biker, turned four-cross and enduro competitor. She was born in Mariënvelde in the Netherlands in July 1982 and took up riding BMX early, competing in her first race at just four-years-old. After BMX success throughout the mid-1990s – she won at six Dutch national titles and two world championships – Anneke switched to MTB DH in search of a new challenge. However, she was having to combine training and competitions with her job at a record store and the results were not forthcoming until, aged 22, she quit work to focus full time on MTB events.

Anneke is now one of the leading names in MTB 4X, having won the World Championships in 2011 and 2012, as well as claiming silver medals in 2006 and 2007. She also has overall World Cup wins every year from 2007 to 2011, with the exception of 2010 when she finished in second. 4X was pulled from the UCI World Cup calendar in 2012 and, while it has since returned, Anneke has switched much of her focus to the Enduro World Series and cross-country.

Anneke’s next challenge is to focus on cross-country and qualify for the next Dutch Olympic Team in the event, with a gold medal from the games seemingly the only thing missing from her trophy cabinet. She is also studying part time to qualify as a nutritionist, a career path she hopes to follow once her cycling days are behind her.