Ever found yourself struggling through period pain, but frustrated by the lack of small visual icon to share your experience on social media? Well, now there’s a petition for that.

Over the last couple of years women have been fighting to destigmatize the very normal process of menstruation. We’ve seen #LiveTweetYourPeriod take over social media, and the battle to remove tax on tampons is still ongoing.

The arguments most make are simple: there is a huge stigma attached to something that 50 per cent of the population deals with on a regular basis, and that has to go.

The newest campaign, launched by Bodyform, seeks to see period emojis added to our keyboards. The icons would represent ‘bloating’, ‘cramps’, ‘pads’, ‘period’, ‘PMS’ and ‘spotty’. All things most women discuss with their friends openly.

Initially we did wonder if this was perhaps a step too far into obscurity. However, when we checked out Bodyform’s promotional material for #Femojis, it did make us think a little harder: 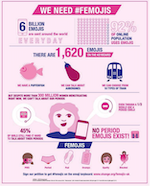 It’s got to be said that it’s a bit ridiculous that there are ten different train icons, and even one for an aubergine – but nothing to represent the very real physical and emotional symptoms many women put up with on a monthly basis.

As Jenna Wortham wrote in The New York Times Magazine when artist Rupi Kaur’s image of a woman on her period was removed from Instagram for breaking “community rules”, social media is happy to represent women in a sexualised manner – but rarely to acknowledge the less inviting elements of our bodies.

Stringing the words that need to be said together perfectly, Wortham said: “Social media is saturated with images of hypersexualized women, but these are rarely considered as scandalous as content that dares to reveal how a woman’s body actually functions.”

Bodyform’s campaign comes alongside the news that one Bristol company is starting to adopt a ‘period policy’, allowing women suffering from PMS and menstruation to take leave. In addition, chemist giant Superdrug have also announced that they’ll now refund the tax on sanitary items via points when customers purchase own brand items.

Bodyform initially intended to present their #Femoji petition to computer coding standards experts Unicode on March 21. However, so far they’ve collected only 36,000 of the 50,000 signatures they need – and the petition is still open to sign, to be presented at a later date.

Would you sign the call for a #Femoji, or would you rather just stick with #FrowningFace and be done with it?

Why the Future's Bright for Women’s MTB Gear

Adele Mitchell started out writing a review, but it became a reflection of a changing culture...

Why the Future's Bright for Women’s MTB Gear

History in the Making with First Ever Junior Women's Road Race

Until now, UK girls have gone from racing as youths to being flung into senior road races. Times are changing.

History in the Making with First Ever Junior Women's Road Race

The Team Sky rider called Pooley 'self centered', then realised perhaps that was offensive

An overall prize fund of 100,000 Euros has been set aside, the same as for the men's race