The Transcontinental is a race for people who are searching for their limits – hard. This year’s edition began in Beligium, and riders had to make their way to Istanbul. There is no set route, but they do have to sign in at checkpoints – some of which adorn the tops of mountains such as Tour de France monster Mount Ventoux.

Jayne began her journey with a partner – Katie – who suffered with exhaustion and fatigue, which forced her to pull out. Taking on the final days solo, she found a new self-assurance, and learned that she’s a lot stronger than she thought…

It all began with a Facebook message. Katie had planned to ride the Transcontinental with a partner, but with weeks to go, she had found herself sans partner. Jayne was asked to step in, and the offer could not have come at a better time.

She explains: “I’d just fallen out of love with cycling. I just felt like I wanted to do anything except ride a bike. That’s a problem because I’ve got too many bikes – I’ve got five. My coach [at Elite Cycling] told me to just take a break, but added ‘see how you feel, I think there is something for you in endurance’. Two days after that conversation a friend sent me a link to Katie’s plea – she was looking for a partner. I said ‘yea, I’ll do that’ without really looking at what it was or how soon it was. When I spoke to her, I realized it was self-supported, and started in two weeks.”

Jayne had taken part in multiple endurance rides before, including the 1,500-kilometer HBK from Handburg to Berlin, Koln and back to Handburg – but she’d always followed. She explains: “Whenever I’ve done these long distance things before, I’ve always been the weaker rider, or the less experienced cyclist, or the younger one. I always handed the responsibility to another person, usually a guy, and just rode my bike.”

In this case, Jayne was the more experienced, and 10 years senior to Katie – she says: “It became apparent early on that as a more experienced cyclist… I was going to take responsibility. I didn’t realise how emotionally strong I was until I had to look after myself, and Katie.” 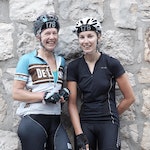 The racers have to create their own route to Istanbul, threading via the check points, through France, Coratia, Greece and Turkey. Some areas were very hot, some very dangerous, some both.

Ways to Get Lost Less when Cycling Organisation before the race began made a big difference to the duo, and to Jayne when she continued on her own – she explains: “Katie was so organised- we had Garmin routes, paper maps, profile routes, translation cards, pre-paid credit cards – she covered every eventuality.”

Despite the huge distance ahead, Jayne describes the race start as ‘hectic’ – saying: “When we got to the start line, the atmosphere was a bit crazy, it was tense, and dark – we set off at midnight – there were torches and bonfires. The first lap was neautralised – but it was so fast. I guess there was just so much adrenaline. After that lap, you came back through the spectators, and over the hill – then everyone just stopped and re-set their computers, and disappeared in their own direction.”

The road was hard – crossing the French alps and into some if Italy’s Giro d’Italia monsters. Notably tough was a 60km military carriageway called the ‘Strada Dell’Assietta’ -a path strewn with rubble that unexpectadly took the pair eight hours to conquer.

Jayne loved the exhilaration of adventure – she says: “It was an awesome challenge and I relaised this was what was missing from my cycling – not the physical challenge but the mental challenge.”

Injury of course scuppers the plans of many – including Juliana Buhring, the ultra-endurance cyclist who was the only woman to take on the inaugural Transcontinental in 2013. Around 1,000 kilometres in to the race, her knees gave in and she was unable to continue.

Jayne and Katie were watching the other female competitors on a geo tracking app – she explains: “We could track the other women and see how they were doing. We could see when some of the other women dropped out and of course we were worried if they were ok, we wouldn’t find out what happened for days after we saw them drop out.”

She had her own struggles with knee pain – as she explains: “I had a pain in my knee when I woke up on day two. It was odd, I couldn’t understand because I’d never had knee problems. I realized after about half a day that I was wearing different shoes and hadn’t dropped my saddle a bit to compensate for them. I was really worried, and didn’t want to worry Katie. Once I’d worked out that it was the shoe, I just rode on flats on my SPDs, then we got to a Decathlon store and I got flat pedals and a knee support.”

While the knee issue needed careful diagnosis and management, she maintains that some injuries are mostly mental: “Partly I think it’s just psychological. Your body just saying ‘just stop doing this’ and I think if you can manage it, in the short term, your body says ‘fine, just get on with it’.”

Twelve days in, Katie had to abandon – Jayne describes the final ride, saying: “We pulled into the car park of the restaurant to see if they had any accommodation and Katie collapsed, she struggled to actually get off the bike and couldn’t walk unaided into the building.”

Finally the decision was made that Katie couldn’t continue – and Jayne was surprised by her own resolve: “When she pulled out in Albania, it never crossed my mind that I wouldn’t continue on my own. I never thought ‘can I do this?’ – it was just like – ok, talk me through the routes. Katie went through them with me, we said goodbye, and it never struck me that I was doing it on my own.”

She did it, though – despite later hearing from her parents who suggested she pull out. She says: “I’d already started, it was too late.”

This year, 250 people entered the race, 178 started, and 76 finished – Jayne being the only solo female. She explains: “We bumped into people along the way who were just defeated – their soul was destroyed. Nothing physical or mechanical, just the mental hardship of it all.”

Jayne’s outlook on the world has changed dramatically – she says: “I think I’m just a lot more confident – I know I did that – when things broke, I fixed them. I think I’ll always carry that with me, making me a bit more self assured – I relise now I can cope and solve problems in really stressful situations.”

“I learned to deal with the fear of ‘what happens if…’ – what happens is you cope. If you’re really in need, you just knock in people’s doors. Everybody ran into trouble at some point, but when that happened they always had these amazing stories of incredible kindness from strangers.”

Next year, she plans to start and finish the same race – solo. The winter will be about riding Audaxes, perhaps the 12 ans 24 hour National time trials, and notching up the miles, in preparation for her greatest challenge. We wish her all the best.

All images from Jayne’s blog, here. 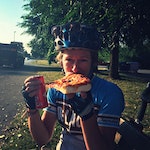 We spoke to the three time champion to get her advice, and ask about those results...

National Hill Climb Champion Maryka Sennema: How to Climb & Why Women's Results Were Lumped in with Men's

"Women Can't Ride the Tour de France"? This Lady Did it Twice - for her Father

We spoke to a woman who rode the entire route of the TdF, once for her dying father, and once in his memory

"Women Can't Ride the Tour de France"? This Lady Did it Twice - for her Father

Contributor Emily Conrad-Pickles is riding 20,000 km to raise money for World Bicycle Relief. Here's a portion of her journey.

Cycling London To Cape: The Turkey Leg of One Reader's 20,000km Journey

Brand new format for the team which we don't think has never been seen in cycling before.

Maggie and Oscar the dog complete their 5,000 mile cycling trip!

They've finished their 5,000 mile journey - here are some of the best snaps from the trip.

Maggie and Oscar the dog complete their 5,000 mile cycling trip!