The Cycle Revolution is showing at London’s Design Museum until the end of June. The exhibition celebrates cycling, and all of its tribes – showcasing everyday commuters as well as Olympic athletes. Contributor Helen Reid (@helenmariareid) shares some of the highlights…

The Cycle Revolution exhibition at the Design Museum is as much about bikes as the people power behind them. I went to look not only at the cycling revolution and how it moves with society, but particularly at how women’s cycling is changing and growing.

The revolution is divided up into four tribes of cyclists – cargo bikers, urban riders, thrill seekers and high performers. Each tribe is represented by one individual who best epitomises the group.

It’s arguably within the urban riders tribe that the change is most visible in our day-to-day life and in our cities’ anatomies. The representative for the urban riders was Lucy Granville – a commuter who won a competition run by the museum. When submitting her entry to the competition, she said ‘my bike is my freedom pass.’ Indeed, in a congested city like London with its overcrowded public transport, a bike means not having to rely on anyone else to get from A to B.

The good news presented was that the modal share of cyclists compared with cars is rising fast in London, estimated at around 3-4% currently, but it’s not enough – the critical mass needed to put cycling at the top of the transport agenda is 10%.

Cities are changing – and I found the area focusing on the cities at the forefront of cycling fascinating. The need to change our urban surroundings to give more space to cyclists is more pressing than ever. Cities from Bogota to Freiburg are adapting to the rapidly growing number of people who want to ride, and the section showed how each city can find specifically adapted solutions to its urban landscape.

Two wheels are not only a freedom pass for individuals, but also create huge economic dividends for society. Besides the huge benefits to our economy brought about when people get more active, there are payouts from the boom in cycling and derivative products. In fact, the museum displays a chart which estimates the national ‘Gross Cycling Product’ as £745 million.

Success in professional cycling can do a lot to promote the sport, and the pros included in the exhibition certainly have played a role in encouraging participation. The incredible Shanaze Reade, who won the UCI BMX World Championships three times, was featured saying after retiring she would work full-time on encouraging women to cycle.

One of my favourite areas of the museum explored the future of bike construction. Featured in this section were Bamboo Bikes, which look surprisingly stable, and the “Tall Bike,” a modern clin d’oeil to the pennyfarthing. 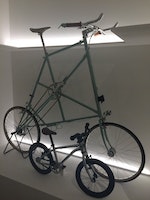 It’s in bicycle construction that the gender divide is perhaps most stark. Mechanics remains one of the least gender-equal professions. Caren Hartley, featured as one of four independent cycle manufacturers, works on bespoke Hartley cycles in her workshop in Peckham. She went from being a metalworker to working on bikes. Since she can’t be at the museum 24/7, she’s represented by a video recording, in which she says: “I thought I was quitting art and going into bikes, but actually I realise I haven’t stopped.” Bicycles – part vehicle, part objet d’art – have held a fascination over artists for centuries.

The exhibition celebrates not only the beauty of two wheels but also its political and economic potential. Cycling crosses gender lines but also class lines – the featured Peckham BMX Club founder CK Flash emphasises the importance of BMX in the lives of youth in the deprived area around the track at Burgess Park.

Just before exiting the exhibition, visitors are treated to a film featuring a selection of bike fanatics from Sir Paul Smith, to Tracy Moseley, to Brompton bikes founder Will Butler-Adams sharing their thoughts about the future of cycling. The interviews are beautifully conceived, as a full-length shot of the speaker with their bicycle in the background, drawing our eyes to the physicality of the cyclist. Our legs which we so often take for granted but which are the engine behind the revolution, take centre stage in this exhibition; as well as the brains needed to create these vehicles and push the new urban politics of cycling.

Want to visit? The exhibition remains open until the end of June – find out more here.

Want to Know Where You Can Buy Me?

A classy post ride coffee cup for a classy rider...

Want to Know Where You Can Buy Me?

Where Can You Buy Me: Cyclehoop BikeShelf

Want to know where you can buy this?

Where Can You Buy Me: Cyclehoop BikeShelf

We spoke to the former Road and Time Trial World Champion for her advice...

Bike Storage: CLUG Gave Me My Spare Room Back

Bike Storage: CLUG Gave Me My Spare Room Back

Lotions and potions to make you a better athlete - but do they work?