There’s a myriad of different bike fitting disciplines, schools of thought and theories. Many of them are associated with individual bike brands, or patented and then passed on via training courses before being offered at a selection of specialist bike shops.

A lot of them are excellent too. However, they’re generally guided by a set of principles and many (not all) work independently of medical professionals.

At TWC, we were recently contacted with the offer of something slightly different. Velo Atelier is a fairly new establishment – they offer ‘products for the discerning cyclist’. If it sounds a little vague – it’s because it is. Not because this set of units tucked away in the country lanes of Warwickshire do anything to a ‘vague’ standard – they do a lot of things in minute detail. That’s just it – they do a lot of things.

The studio is the brainchild of Lee Prescott, a frame builder by trade and an expert in ergonomics. Prescott has worked at a high level in the bike field (he was once the designer-in-chief at Pashley, for example) and outside of it – helping design safe till spaces in the major four supermarkets. As he puts it: “A till space is a bit like cycling in reverse – the lower half stays still as the upper body moves”. Good point, I’d never seen it that way.

The studio’s primary goal is to provide cyclists of any level with pro standard services: be that physiotherapy, offered at the clinic next door with whom Velo Atelier is partnered, every aspect of bike fitting (saddle pressure mapping, custom insoles, cleat fitting) as well as coaching and pedalling optimisation. On top of all that, they also offer custom frame and wheel building. Have I missed anything? Probably.

Unlike most bike fit services, there isn’t a set price. Instead, a first appointment – costing £50 – is used to establish what you actually need. After that, services are charged by the hour and you can have as much or as little as you want or need. That does lead you to expect a bumper bill, but actually some services really aren’t what you might think – custom foot beds, with high tech fitting, for example are just £60.

Prescott doesn’t fit using a specific, pre-set technique, but he does attend ISCO (International Symposium of Cycling Optimisation) meetings and has studied most of them – so effectively what you’re getting is an amalgamation of the leading fits, supported by physiotherapists at Core Health and Wellness just next door.

All this considered, it seemed like a good idea to visit, so we did…

Before my fit, Prescott emailed me with a questionnaire to find out more about my cycling, and any problems I was having – something that we discussed on arrival (over fluffy cappuccinos, obviously).

The formalities over, I was shuffled over to Core Health and Wellness, where Sports Masseur Jenny Disney assessed my flexibility and looked for any issues. I’m a bit hyperflexible – I knew that so no surprises there. However, it also seems my right foot takes a little more stress than my left – something that Lee confirmed with some clever weighing scales that showed that I’m putting an extra 1kg of weight through the right as opposed to the left foot. My poor right foot!

Why could this be? Well, that’s something we were going to find out – scientifically. I was led into another room, which holds the Diers machine. This clever (probably hugely expensive) device is used to examine the state of a person’s spine without an x-ray. 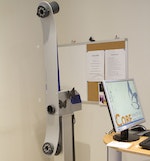 The results showed that when standing normally, there’s a curve in my back, but with a small pad under my left foot, this is corrected. In other words: my left leg is longer than my right.

Further analysis showed I have high arches, and a little less ankle stability in the right foot. I need insoles – something Prescott moulds for only £60 over at Velo Atelier.

“If the foot position isn’t right, everything else can be knocked out of alignment.”

The insoles were carefully moulded to work with my feet. Prescott emphatically explained how everything begins with the feet, saying: “their movement sets of the chain of events which sees a cyclist propel the bike forwards. If the foot position isn’t right, everything else can be knocked out of alignment.”

It seems like entrepreneur Prescott has considered every element in extreme detail, my favourite example being the use of magnets when it comes to setting up cleats. Where most bike fitters simply feel for the bone of the foot through your shoe, Prescott uses tiny magnets on the foot and outside of the shoe to ensure absolute precision. Sure, it’s not rocket science, but do you see anyone else doing it?

We’d done a lot of work by this point – and you may notice I’d not even sat on a bike. That was next. It was actually the HOY Fiorenzuola track bike I’d come to be fitted on, which meant I was about to spend some time pedalling fixed gear on a turbo trainer, not my favourite thing but do-able.

I’d been riding the bike for several months and was fairly comfortable on it, but something wasn’t quite right – I felt a bit hunched and from time to time found my fingers become numb. I couldn’t put my (numb) finger on what I need to do to fix it, so I was hoping Lee could.

I pedalled along to a trainer video – I was told I could keep pace with the pace maker, or ride away from them. Being myself, and faced with a screen with numbers on, I felt the need to ride bang on my FTP [the power I can sustain for an hour] and stay there. Lee watched what was going on, made notes, and ran a video throughout the exercise, which could be used to show the angles of my body. I was also sitting on a pressure mapping tool which would show where I was placing my weight.

Prescott is well aware that for many women, saddle discomfort is a major issue in bike fitting. He comments: “We’re experienced in resolving these problems, and not shy about discussing them either – something you don’t find everywhere.” He even explains to me that recent customer comments and studies are leading him to explore how women might suffer reduced flexibility and increased stiffness during certain period of their menstrual cycle.

Along the way, we had plenty of time to discuss other elements of cycling aside from the fit – most notably my time trialists trait of struggling to change speed quickly – something that’s essential as I embark upon track and crit racing this year. Prescott, a BMXer in his day, had plenty of advice on this – and told me to try focusing on applying horizontal force to the pedals, not riding in ‘circles’ as is commonly advised. It worked, and I saw the shape of my pedal stroke change on the screen, and my power output shoot up.

Once the miniature time trial was complete, I got off and Prescott processed the information. Leg extension: fine. It turns out my body has adapted to my wonky legs, and that contrary to my own belief, my knees are tracking straight – all good!

The problem area was that I was looking rather curved, and a bit scrunched over the bars. In addition, the pressure mapping tool showed that I was placing all of my weight on the front of the saddle. That’s something I could have told you anyway without a data graph, but I’d always assumed it was just a personal trait, and not a problem.

Apparently – it is a problem. Prescott pointed out that you can’t see the nose of the saddle when I’m riding, because I’m sitting on it. So, he told me to edge myself back, giving me a clear marker to show exactly where I need to position myself. The new position felt odd, but as soon as I adopted it, the front half of my body uncurled.

A pressure map in the new position also revealed an improvement – the black mark showing where the majority of my weight was, and the front section has become less pronounced. In short, this is where I’m meant to be sitting.

I was riding on a time trial focused saddle, which partially explains the position. We tested out a different saddle (the Selle Italia SLR flow, of which I have two at home!) and Prescott confirmed that this would make it easier to adopt the right position on this bike – so he marked the point where I needed to set this up.

It’s easy to send someone away with an adjusted bike set-up and a new cleat position – but to confidently come to the conclusion that what needs to change involves a conscious effort from the rider implies a great deal of confidence in the process. For me, it’s going to require quite a bit of effort and readjustment too.

I left my bike fitting extravaganza with a suitcase full of newly acquired knowledge about my body, my riding and some useful pieces of information I can put into practice in the future.

I’ve had bike fits before, and I’d never dream of putting anyone off from heading down to their local bike shop to be set up correctly – it makes all the difference. However, if you’re after an in-depth, performance level fit, then Velo Atelier may well be your best port of call.

Nothing here is cookie cutter, which is important, because every body is different.

It’s not all just for those after a full on, pro-level fit, either. You really can have as little or as much as you like – but you know it’s all going to be of expert quality. You can drop in for one off services – insole fitting at £60 and saddle selection at £100 an hour are one off options you can choose if there’s a specific area you feel you need to focus on.

There are plenty of fantastic, expert bike fitters out there, and I’d not go so far as to say this one trumps the entire field. However, what I liked most about this fit process was that the experts of this establishment are agnostic in their approach, and therefore not likely to send you away with a cookie cutter approach. Nothing here is cookie cutter, which is important, because every body is different.

Want to read more about bike fitting and overcoming discomfort? Try these…

4 Reasons to get a Bike Fit

ISM Saddles: The Weird Looking Perch that Could Save You From Pain

Are you buying your first bike? Our guide that explains what you need to consider if you're buying a road, mountain bike or hybrid bike....

QL Care: Look after this Troublesome Cycling Muscle to Avoid Lower Back Pain

The QL muscle is in your lower back and can become sore when you're cycling. We explore how you can avoid pain and provide some...

QL Care: Look after this Troublesome Cycling Muscle to Avoid Lower Back Pain