It’s the time of year when the daylight doesn’t last as long as we’d like – and suddenly it’s necessary to attach a beam to the front and rear of your bike.

The good news is that with the right lights you really can keep on riding just as much as you did over summer. High lumen lights can brighten up the roads and trails like car headlights, and they don’t need to cost the earth either.

A new presence on the UK lighting scene, Xeccon have been producing lighting products for years. They have experience creating torches for deep sea divers as well as on and off-road cyclists – they might well be the biggest player you’ve never heard of. Well established globally, Xeccon have a reassuringly good track record of reliability and weather resistance.

The brand’s prototypes are heavily tested: lights go through various simulated conditions, are evaluated and have their specifications tweaked. Every unit is built, checked and sent to the test rooms where they are left running for hours before being boxed and ready to ship.

Now Xeccon have picked up a UK distributor, so we can expect to see their lights appearing on British roads more often. Each light comes with a 12 month warranty – always a good thing to know

We’ve had a look through the range – highlighting five key lights for the autumn/winter season.

The Zeta models are Xeccon’s most powerful lights. We’ve looked at the details for the 1300R – that’s the base model. There is also a 1600R and incredibly bright 5000R at the top of the range.

This light is created with off-road use in mind – but if you want a brilliant beam for unlit roads it could be up your street. It produces 1300 lumens – which is enough to allow you to ride on country roads or trails almost as though it was daylight.

The shell is robust, and a wireless remote allows you to switch through the output levels easily. You can place the remote anywhere your like, too – keeping it at hand so you can go for an extra bright beam when you need it or turn it down in traffic.

There are four different light levels – and a strobe mode. On the highest output, battery life is at 3.5 hours, progressing to 38 hours when flashing. Charging takes around five hours for full juice.

The Zeta is housed in a compact aluminium body and comes supplied with mounts for handlebars, helmets and action cameras, along with a longer second lead. For most road riding, a bar mounted light with the battery strapped below the toptube of the frame will be the most suitable set-up.

The Zeta range is ideally for mountain bikers, or roadies who want to ride hard and fast on unlit roads. For those who want to see a little more on unlit terrain, but don’t need the absolute max is the Spear 600.

The Spear 600 is a compact, all in one unit – so there’s no need for an attachable battery pack. However, this little light packs a punch, providing 600 lumens which is enough for unlit roads at a moderate pace.

The light uses one single LED lamp, and has three modes as well as a flashing ‘strobe’ option. On the highest mode, it’ll last two hours, whilst flashing it can take you up to forty hours.

The unit is sealed against wet weather and attaches to a wide range of handlebars via a stretchy rubber bracket. The ally/plastic body contains a handy USB charging port, so you can pop it on charge at your desk when commuting to work.

If you’re a commuter after a simple to use light that doesn’t break the bank and will ensure you’re seen, then the Link 300 could be up your street.

Lights in this category have moved on a lot in recent years – not long ago for under £30 you’d be looking at a plastic body, fuelled by AA batteries that would die after two hours providing questionable light.

With lights like the Link 300, you get so much more. This unit provides 300 lumens, and charges via a USB. It runs for two hours on full beam, and there is a lower light mode which gives you ten hours run-time.

The shell is water resistant and made of an alloy/plastic mix – using a stretchy rubber bracket to fasten it to the bike. Other Xeccon options are the cheaper Link 150 and a higher output (twin LED) Link 600.

It’s not just about lighting up the road in front, of course. A rear light is a legal requirement on the roads (and a very sensible addition off road).

Rear lights aren’t only for dark mornings and evenings – they’re also a good idea in low light such as fog or wet weather.

The Mars 30A is a compact and affordable rear that puts out 30 lumens – enough to ensure you stand out from metres away. It’s got some smart features too that you might not see elsewhere for this price.

There are three modes – a high, low and ‘daylight’ setting with strobe and flash options. The light can be charged via a USB cable. The party trick for the Mars 30A? If your bike is stationary for more than five minutes it’ll automatically turn off to save your battery.

It’s got more up its sleeve though. Xeccon have also added a Smart Brake Indicating System (SBIS). Regardless of what light mode you are in this system identifies when you’re braking and automatically turns to the brightest mode, alerting the following traffic. This brake light can function in daylight too, when you’ve not got the light switched on.

A cheaper Mars 30 model is available for under £20 if you prefer a more basic rear light. Otherwise, the Mars 30A is a well designed, high spec choice which will help keep you rolling safely through the darker, wetter months.

The Geinea III lights are designed for daylight riders who just want an easy to use set of lights that will boost visibility on the road. They’re also a great ‘back-up’ pair, just in case you find yourself out later than expected or your normal lights should fail.

Sold individually or as a twin pack, the Geinea III lights are one of Xeccon’s most compact models. With a simple stretch rubber strap, they’re designed to be fitted quickly and to stay securely in place on the handlebars, regardless of their diameter. 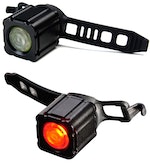 Fifteen lumens from a single LED should provide enough visibility to use these as a safety light on low light or drizzly days, while there’s also the option of a steady or strobe setting.

The Geinea lights have a high quality aluminium housing and offer burn times of between 2.5 to nine hours, depending on the setting. They are powered by an internal rechargeable battery and a full recharge takes 2.5 hours.

Brand new threads from Primal in time for Christmas

When reflective Lycra just won't do...

Danish company, Vear, have developed a pair of waterproof trousers for commuters, Legs Jacket. Pop them on without having to take your shoes off.

We put the FWE USB Rechargeable 500 Lumen Front Light to the test to see how it got on now that the nights are closing...