The Ladies Tour of Qatar snakes through the desert for four days in a race that is known for favouring sprinters and strong teams that work together to beat the wind.

The Women’s World Tour: What to Watch and When

The race, now in its eight year, also shares some roads with the World Championship course in October and will provide an opportunity for riders to carry out a very early recce of the route.

All in all, 90 women will line up to start this year, made up from fifteen different teams. Last year’s winner, Lizzie Armitstead, will not be lining up for this year’s race, preferring to save herself for the Omloop Het Nieuwsblad in Belgium. Four time winner, Kristen Wild, will however be taking to the start line and will no doubt hope to wear the Gold Leader’s jersey again.

Wild didn’t race the event last year, and is putting a hefty focus on Olympic qualification on the track in 2016 – but she’s still got strong legs as proved by recent success winning the Omnium at the 2015/2016 Cali World Cup.

Chloe Hosking of Wiggle-High5 is another pre-race favourite. A runner up last year, she has already told us: “It’s not secret that I love racing in the desert. I love the winds, the echelons, the battle to make the front. And the Ladies Tour of Qatar is one of the only races on the calendar that offers that, day after day, for four days.

“This years edition is a big goal for me. I’ve finished on the podium here for the past three years and I’d like to continue the trend, although the top step would be nice, if only so I look as tall as the other girls I race against.”

Other riders to watch include Boels-Dolmans rider Ellen van Dijk who was also on the podium in 2015, and Canyon//SRAM’s Lisa Brennaur – both of whom will have strong support from high caliber teams

The race kicks off on Tuesday with a 98km route from Katara Cultural Village to Qatar University. 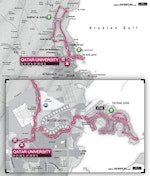 Stage two on Wednesday covers 112km from the Sheikh Faisal Museum to Al Khor Corniche – a city on the Northeast coast, which could give way to stronger winds towards the finish. Stage three on Thursday is 112km long and will take riders from the Al Zubarah Fort to Madinat Al Shamal  – the riders will then complete four laps, giving them a chance to taste the win three times as they pass the finish line before the actual finale… 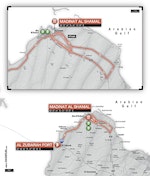 The final stage on Friday is the shortest at 73 km from Aspire Zone to Doha Corniche. The riders will complete an almighty eleven laps along the Doha Bay, where no doubt the wind will come into play in deciding the winner. 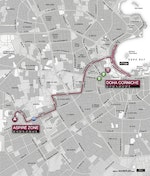 Stage One Report: Kristen Wild back in Gold

Kristen Wild (Hitec-Products) claimed the Gold leader’s jersey once again, taking her tenth stage win in Qatar after a still day with very little chance of a breakaway sticking.

Thirty or so riders were dropped during the early kilometres leading up to the first intermediate sprint – with Orica-AIS and Boels Dolmans driving the pace. However, the bunch was reunited after less than 10km with low winds making a chase much more achievable.

There were two intermediate sprints  – and it was Kristin Wild who bagged the win, followed by Wiggle High5’s Chloe Hosking with Marta Tagliaferro in third.

The second – which shares the finish line with the 2016 UCI World Championships which will run on the same roads as the riders covered in Stage One – was won by Chantel Blaak of Boels-Dolmans with Chloe Hosking in second and Mara Tagliaferro again in third.

The pack then remained together all the way to Qatar University, where eventually Wild outsprinted the bunch to come first ahead of Ale-Chipollini’s Annalisa Cucinotta and Lizzie Williams (Orica-AIS).

The top three on General Classification remains the same as per the Stage, and Wild has a 7 second advantage over Cucinotta and 9 seconds over Williams. Wild also claims the Silver points jersey, whilst Italy’s Arianna Fidanza wears the White young rider jersey.

Stage Two Report: High winds give way to breaks and a solo win

High winds today meant that echelons and breaks for freedom from the peloton were promised. That’s exactly what the race delivered – with race favourite and Stage One winner Kristen Wild losing 3 minutes 48 seconds on the new leader as she was separated from the bunch following mechanical issues.

Early in the race a group of 27 riders forced a break from the peloton – and Wild (Hitec Products) didn’t manage to join the leaders.

With 20km to go, Wiggle High5’s Elisa Longo Borghini launched an attack with recent Tour Down Under winner, Katrin Garfoot (Orica-AIS). A counterattack then reduced the group to just ten riders as the finish line grew closer.

With just 5 kilometres to the finish four riders made a further break for freedom – with them was Garfoot, Trixi Worrack of Canyon//SRAM, Romy Kasper of Boels-Dolmans and Wiggle High5’s Amy Pieters. They steadily built up a gap, but then with just 1 kilometre to go, Garfoot made her move and raced to a solo victory, with Worrack coming in second, thirteen seconds later, followed by Pieters.

Wild still holds the Silver points jersey, with a one point lead over Garfoot, whilst the White young rider jersey now sits on the shoulders of Anouska Koster (Rabo-Liv).

The stage shakes up the general classification massively – and the race now stands at:

There was yet another GC reshuffle following the third installment of this exciting race as Ellen Van Dijk of Boels-Dolmans won solo having taken a springboard from an early breakaway group.

The results of the day put Canyon//SRAM rider Trixi Worrack in the overall lead, seventeen seconds ahead of Boels-Dolmans’ Romy Kasper.

There were 87 riders at the start line of the 112km race, but just 2km in 13 riders pulled away – led by five time winner of the race, Kristen Wild (Hitec Products). With her were Ellen Van Dijk (DLT), Trixi Worrack, Romy Kasper (LPR), Gracie Elvin (OGE), Shelley Olds (CPC) and best young rider, Anouska Koster (RBW).  The leader at the start of the stage, Katrin Garfoot (OGE), was not with the group and rapidly lost time.

The thirteen dropped one rider – Jeuland – and by the almost-half-way-point had racked up a gap of 2 minutes 50 seconds. The pack chased, and by the 99km mark the time difference was down to 55 seconds. Orica-AIS’ Gracie Elvin attempted to make her move and get away from her fellow breakaways, building up a ten second lead. However, with just 4km to go she was caught.

By the time the group of 12 reached the 2km to go line, they still had 45 seconds on the peloton – and it was then that Van Dijk made her move.  Powering to the finish line, the 2013 World Time Trial Champion crossed the threshold seven seconds ahead of Wild, who came in second, and Hanson, in third.

The stage’s top five were:

The cumulative result from three days of racing puts Worrack in the lead on the GC:

Today’s final stage in Qatar was the shortest yet – at 73km, and with ten finishing circuits it became a fast and aggressive race that ended in a sprint finish claimed by Wiggle High5’s Chloe Hosking.

Leader after stage three, Trixi Worrack of Canyon//SRAM, finished in the bunch and held onto the Gold jersey, with seventeen seconds over the nearest competitor, Romy Kasper of Boels-Dolmans.

There were some attempts to split the peloton over the course of the race, but the flat route and the high number of sprint specialists in the bunch meant no attacks stuck, and Hosking beat second place Kristen Wild (Hitec Products) to the line be a whisper.

She said: “I think it was a sprint that I really actually thought about, leading into it. I definitely used what I’ve learned, riding with Egon [van Kessel] and Jolien [D’hoore] and obviously it worked out! We were doing circuits. There was a bit of wind, but it didn’t really have that much of an impact on the race. It sort of strung it out a bit, but it didn’t split it.”

She added: “The girls were really great in the last two laps. We got together as a team and they pulled me up and put me in a perfect position!”

The overall win will no doubt bolster the spirits of new team, Canyon//SRAM. Worrack said: “We are really happy to start with a victory straight into the season. It was a lot of work but we all put our energy together and believed that we could win the golden jersey here. For the last five years I have always been close on the general classification. So now to take the win home with me it is really special.”

Team Manager and Directeur Sportif Ronny Lauke added: “It has been an interesting winter for everyone involved in the team. Getting here to Qatar we knew that we have trained well and that there will be two days of racing where more wind was forecast. We made those two stages our focus. We have now started the season with wins on both individual and team GC at the Ladies Tour of Qatar makes it all very special. I hope that it gives the entire team enough confidence and additional motivation for the long season ahead. This all is very rewarding for everyone involved in CANYON//SRAM Racing.”

The race may give us a glimpse into the performances we can expect over the Women’s World Tour – read about the full line up of events here.

The Women's Tour Needs a New Sponsor for 2017

Who will step up to shape the event in 2017 and beyond?

The Women's Tour Needs a New Sponsor for 2017

Three Tour Down Under Podiums in Two Stages for Wiggle High5

The recently renamed Wiggle High5 team are cleaning up in Australia

Three Tour Down Under Podiums in Two Stages for Wiggle High5