Organisers of the Tour de Yorkshire were eager to ensure that the Asda sponsored women’s race was a prestigious event and the peloton are certainly gearing up to present an exciting performance.

With a £50,000 prize fund, and first place fetching £15,000, the event is one of the most lucrative women’s races in the world. The route covers 136km – the same distance and route as that negotiated by the men on the second of their three day tour, and there are three classified climbs, and two intermediate sprints.

Weather conditions have been less than favourable, with snow falling just days ago, and rain today – but forecasts show bright sun for much of tomorrow morning in the area. So it’s lucky the women will be finished by lunch time, then!

Otley home girl Lizzie Armitstead is probably the rider on everybody’s lips. However, she’s already played down her chances of victory – telling us on Monday that she’s had a week off the bike to recover following spring racing and that her attention is now on Rio.

There will be 17 teams represented in total, including London based team Les Filles. The black-and-pink train was initially not included, but later added in light of their team member Louise Mahe being the defending champion after her win last year…

The route covers 136km, from Otley to Doncaster. 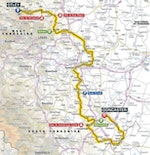 If you’re local, or making a trip to watch, the best places to position yourself are probably at the start or finish, or at one of the Queen of the Mountain points. These are at Harewood Bank, near Harewood House, East Rigton, and Conisbrough Castle.

As the race draws closer, we’re hearing more from riders about their expectations from the race, thoughts on the course, and the prospect of live TV coverage as well as a fantastic prize fund.

Speaking after a course recce, Dame Sarah Storey of Podium Ambition Pro Cycling Powered By Club La Santa team, said: “Having ridden the event last year it is brilliant to see the race become a UCI registered race this year and be 136km in length with full TV coverage. I am excited to start my season here, I have chosen to wait until the middle of the spring because there is so much racing for me this year and I want to still be firing on all cylinders in the autumn when we hopefully will be in Rio and Qatar.”

Podium Ambition will race with members of their sister team, Boot Out Breast Cancer – the club is open for all to join but features a few select academy riders supported with sponsorship.

Wiggle High5 rider Dani King is enjoying her first full season entirely dedicated to road racing, having shifter her focus away from the track. She said: “I can’t wait to race tour of Yorkshire. I always love racing in the UK – there’s always amazing support on the roads! It’s great that the UK is leading the way in terms of equal prize money for the women, and I think that’s a huge step forward that this is now starting to happen. It’s always great to race with my Wiggle High5 team mates and I just hope the snow stays away come race day!”

Les Filles are excited to be fielding a team to support defending champion, Louise Mahe, and have commented: “Admittedly the Tour of Yorkshire is going to be one of the hardest races our team has ever done, but we will endeavour to do the Number 1 jersey proud (Disclaimer: we do not actually know if Lou gets the Number 1 jersey).”

Team TWC is currently on a train on the way to Yorkshire. We’ll be bringing a race report after the event – but you can follow the action live via tweets from Le Tour Yorkshire.

An event that allows the sprinters to shine, all images from Velofocus

Kirsten Wild takes the Win at the Tour de Yorkshire

Lizzie Armitstead's breakaway caught and a sprint for the line

Kirsten Wild takes the Win at the Tour de Yorkshire