If you asked me for recommendations on a bike under £1,000 – I would list this Boardman Team Carbon in my top five. Its lively ride and respectable spec means you get a lot of bike for your money – and if that’s not enough the paint job should push you over the edge.

The Team Carbon has been a part of the Boardman stable since the early days of the brand, and its remained at the Cycle to Work comfortable price point of £999. The frame geometry on the standard bike hasn’t changed since Nicole Cooke raced to Olympic glory on it in 2008, though the women’s model has seen a few tiny tweaks.

For just under the £1k mark, you’re never going to get a bike with the best of the best spec, but the Boardman comes with a couple of sparkling touches that set it apart.

The team carbon is designed to be a sportive or endurance ride – and it certainly provides the comfort and spring of a bike that you could spend all day on. The C7 carbon frame works alongside a full carbon fork with tapered steerer to absorb the bumps of our Great British roads, whilst the super skinny seatstays also contribute to dampen out unwanted vibrations.

However, what I love the most about this bike is that the oversized downtube runs into a chunky bottom backet and chainstay layout, all of which accumulates to provide a lively ride that feels like it wouldn’t be too out of place in a crit race. The handling is sure and every corner feels like it’s begging to be taken just a little faster on this machine, and the same ‘ride it like you stole it’ sensitivity comes into play when descending.

At £999, it’s not surprising that this isn’t the lightest bike in the stable – but it’s also not heavy for its price point. The wide bottom bracket means there’s plenty of stiffness when climbing – and of course if this is your first road bike it will feel like it’s floating up the hills.

To make the bike female specific, the geometry has been tweaked with a shorter top tube, and narrower bars have been added. I’m all for a narrower cockpit, and the 40cm shallow drop handlebars suited me fine. I also found myself getting rather accustomed to the extra padding on the bar tape which felt great on longer winter ambles.

How to find the perfect road bike saddle

Fitting a female body to a unisex bike

Unfortunately, however, Boardman committed a cardinal sin in my book by fitting the bike with a 50mm stem alongside a women’s saddle with no cut out. I’ll leave the saddle debate untouched, as bottoms are all unique, but the short stem was the first thing I changed, swapping it for a 100mm version. This immediately altered the ride of the bike, and in my opinion improved it, allowing me to get lower over the handlebars and enjoy the fantastic handling the frame and fork allowed for. If I’d change a thing, it’s that I’d make the bike more stretched out, but that’s not on everyone’s wish list and would take away from some of the comfortable, endurance element.

The Women’s Team Carbon features Shimano Tiagra 10 speed shifters, front and rear mech. You can, admittedly, find carbon framed bikes as this price point with 105 groupsets. However, Shimano gave their Tiagra system an upgrade last year, and the newer system which features on this bike has seen some nice trickle down technology from its big brothers – with the shifters shaped much like the Shimano 105 versions, and a longer cage on the front mech which makes changing from the small to big ring quicker and more effortless.

The gearing provided is a compact 50/34 chainring, with a 12-28 cassette – which is more than enough for most of us to get up the hillocks in the UK and abroad.

How To: Choose the Perfect Road Bike Gear Set Up For You

The groupset isn’t entirely Tiagra – you get slightly lower end FSA cranks, though they’re teamed with a high-spec-f0r-the-money FP30 bottom bracket.You also forgo Shimano’s braking system for Tektro dual pivot calipers . However, perhaps it was ‘new bike feeling’ speaking, but I found these were quick to respond to application and had a nice bite that I certainly felt I could rely upon.

There are eyelets for mudguards, but not panniers – but we reckon with a bike that rides this nicely, you’d be better off not weighing it down and opting for a backpack, anyway.

More often than not, a sub £1k, even a sub £2k bike, will come with wheels that let the bike down. Since wheels impact the performance and enjoyment of a bike so much – this always seems a shame. Boardman still haven’t gone for the highest of high end, but the  Maxic CXP-Elites are a step up from what most can offer. More of a commuting/all weather wheel, the good news is that the 28/32 hole high spoke count means you can rely on these to keep rolling true underneath you. 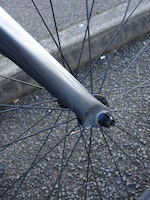 Not only that, they come shod with Vittoria Zaffiro Pro tyres in a comfortable 25c. The Zaffiro is absolutely a winter tyre, and one I’ve ridden on merrily and almost puncture free for many a winter season. These will be resilient and grippy in the wet, though would be worth upgrading for something faster and more supple come summer.

As with the entire Boardman range, the Team Carbon Women’s features the new brand logos, look and feel. The old ‘CB’ initials have been lost, and replaced by the simple ‘Boardman’ (though look closely and you’ll realise the ‘C’ is still enclosed within the ‘B’), and what we’re now christening the ‘Go Faster B’. Jokes aside, the new look goes a long way to smartening up the brand.

Elephant in the room moment: The paint job has an undeniable whiff of Bianchi about it. However, this is far from a criticism – the bike appears super stylish and we found when riding it with men (journos and normal ride buddies alike) whose version is black and yellow, the stunning celeste hues where much coveted.

This is an excellent first, or even second, road bike. It sits perfectly at the Cycle to Work scheme price point, and the trickle down frame geometry means it rides like a much more expensive machine. Of course, there are potential gains to be made from upgrades to the wheels and brakes, but those can always come later – what’s harder to find is a frame that balances compliance with a racey, fun-to-ride feel, and the Team Carbon has found harmony between the two beautifully.

Want to see more? Check out the bike on the Halfords website here.

There’s currently a chance to win a ride out with Chris Boardman, and a new bike from the range. Entry closes on February 29th – read more here.