In war torn Yemen food is short, fighting is constant, air strikes are frequent – but the most shocking event ripping through the nation right now is a group of women choosing to ride bikes. 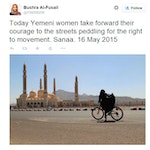 Women there are allowed to drive in Yemen (unlike their Saudi Arabian neighbours) but petrol supplies are low – so a women’s rights activist and photographer decided to help them become more mobile by encouraging them to get on bikes.

Bushra Al-Fusail created a Facebook event: “Let’s ride a bike.” Hundreds of women ‘joined’ the group, and took to the road on two wheels.

The idea of women riding bikes is seen as immodest by many Yeminis – but Al-Fusail told the BBC: “I see men cycling everywhere… so I thought, why can’t we ride bikes too? After all, it’s not illegal, it just needs bravery.”

The bike ride empowered many women – and the page is now filled with those asking for a repeat event. However, photos of the ride also received reactions of disgust, hatred – and amazingly, disbelief that women could even ride bikes.

The BBC reported comments stating that it was the fault of the war that such an atrocity could take place, such as: “This is what this war has brought.”

The picture below has received 167 comments, some calling it “the fruits of the revolution” – yet others state “lie lie lie”, “these are men dressed as women” and “I do not believe my eyes.”

Bushra was scared in to disabling her Facebook account for some time, following abusive comments, but she remains active on Twitter. In a comment to the BBC, she said: “People need to change the way they think… They need to stop thinking of women as sexual objects, only then will they stop seeing everything they do as sexual.”

Women all over the world can identify with that comment, to varying degrees, but we’re sure all of us will join together to wish the women in Yemen the best for their future rides, and future freedom.

We bring you the first pics from the Women's Tour 2015

Straight forward stage one but coastal winds could play a part

We bring you the first pics from the Women's Tour 2015

Straight forward stage one but coastal winds could play a part